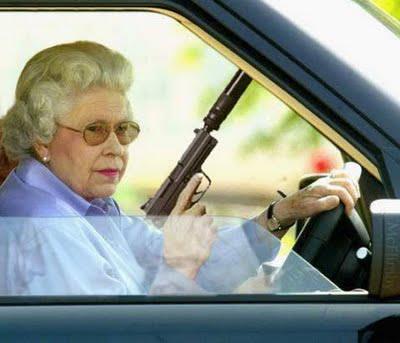 From the wilds of the interwebs:

We have all witnessed this scenario:  You are driving from point A to B, obeying traffic laws and doing your due diligence as a responsible driver when another driver behind you doesn’t think that you are moving fast enough in the 25mph residential area.  You complete a stop at a four way near a school when the driver behind you who has been following impatiently way-too-close lays on the horn and shouts, “It’s a stop-sign not a parking lot!!!”

Aggravated at the flat-out rude display toward you and the disregard for the safety of others, you slam your car in park and exit the vehicle visually angry with aggressive, fast movement toward the offending drivers’ car shouting obscenities.

In order to have an appropriate view of this scenario, we need to break it down into basic use of force levels and appropriate responses.

The driver of the vehicle behind us is clearly demonstrating unsafe driving practices prior to the event coming to a zenith.  Prior to the altercation, we as responsible people have quite a few choices to handle this type of driver appropriately- and legally.  The easiest method is to signal and pull over, letting them pass.  Get the license plate number and call local law enforcement if you feel they are a danger to others.  If they are merely a pest- allow them to go on about their merry way.

For the actual moment where the driver goes from annoying to disrespectful, we need to remember that a person yelling obscenities or sending gestures our way is in no way assaultive unless:

–          They make physical action to suggest that an assault is imminent

In our classes, we talk about the idiot in the car as the “Big Talker.”  They are the one looking to goat you into doing something stupid by pushing your buttons.  This person exists at what is known in the law enforcement world as an “Active Resistant” subject.  In the law enforcement world, this person can be lawfully engaged with physical less-lethal techniques if verbal control does not work.  For those of us in the civilian sector- the Big Talker is just that- a talker.  Based on appropriate use of force, the options that we have for this person in a bar-type scenario is to warn the individual and gain distance.  (the warning and distance allow us to see if they are going to stand their ground and talk, or close distance on us as we open our reactionary gap making their actions potentially assaultive (let the Spicyface games begin)

In a vehicle scenario, a big-talking idiot bottled up in a car is just an idiot in a car. They are not a threat at this given time and can be countered by…you guessed it- driving away.  (For those with the “what if?” faces on regarding “what if they follow me wherever I go??”…that is for another day and another lesson.)

For us as the responsible citizen, the whole-person, to exit the vehicle in the manner described above and encroach aggressively on the Active Resistant driver, we in turn become the aggressor.  DO NOT get me wrong- we all want to, he/she deserves it. Regardless we cannot as responsible (possibly responsibly armed) citizens.  At a minimum, if a physical altercation comes from our actions of rushing their vehicle, we will be charged with mutual combat (a.k.a. fighting) and both will be charged.  If the person in the vehicle can articulate that you charged them like a madman/woman and they engaged you with less-lethals like pepper spray and/or physical techniques after you assaulted them for honking at you- you are in a world of hurt.

One of the biggest challenges for a responsible person in the wilds of society is to keep your emotions in check.  By doing so, we can properly assess the situation and respond accordingly according to constitutionally sound use of force allowances.  In short, give the idiot the opportunity to make the wrong move and don’t make their actions justified.

Her turn signal is on and it’s staying on. Deal.